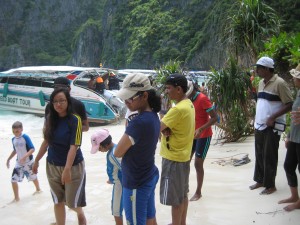 A recent holiday to Krabi Ao Nang, whilst not the holiday from hell, highlighted some of the less attractive aspects of  the cheap Asian getaway. It all started with the Holiday Inn Ao Nang which in itself was a well appointed resort aside from the lack of privacy it its design.

Mistake No 1: When a site says, minor renovations, no activities affected – BEWARE – circular saws buzzing and constant hammering from 07.30am – 6.30pm 7 days a week does not seem like a minor inconvenience to me. A panoramic view over a building site and into everyone else’s room was not quite expected either. The not so faint whiff of sewerage emanating from the large drain between this resort and the one next door was also disconcerting.

Why is it that nothing is ever quite finished in Asia? A green gauze netting obscured the beachfront directly outside the hotel, supposedly to prevent the unsuspecting tourist or local from toppling onto the beach where a new rock wall was being built to keep back the tide. Funny thing though, not a workman in sight for the entire week of our stay. The shoreline ( too tidal to be called a beach) itself is stunning with its surrounding verdant hills and limestone outcrops in the water. BUT don’t look down ! The rubbish washed up with every tide was disgusting, not just plastics but flotsam of toothpaste tubes and other household garbage.

Mistake No 2: The 4 Islands Snorkel Tour  widely promoted as the best snorkelling experience was in fact one of the worst examples of over exploitation that I have ever experienced. Unsuspecting tourists gathered from all the local hotels to a central point, left waiting for nearly an hour and then herded in groups of 45 onto waiting boats with 3 massive outboard motors each. Once packed in like sardines , our trusty Thai escort (guard) then held up a sign to indicate the reboarding time and boat number and strict instructions not to be late, otherwise we would be left behind to be picked up at the same time the following day. First stop Bamboo Island. It soon became apparent why the boat number was so important as 20 other boats pulled up in quick succession to disgorge their occupants onto this small beach with one small roped off area for snorkelling, the rest of the beach being deemed out of bounds because the of the ‘stingers’. A strict 20 minute curfew, then back on the boat, our guard now equipped with a loud hailer to encourage our on time departure. The procession of boats then proceeded to Maya Bay,a picture postcard beach which was in fact not a beach at all, because the tide was in. However this did not dissuade our tour operator from dumping us all onto this treacherous strip for our allocated stop /photo opportunity. Why ? Perhaps so we could walk inland to not use the foulest smelling public toilets?  Loud hailers deployed , and back onto the boat for lunch at Phi Phi Don.  This however was not the Koh Phi Phi renowned for its beautiful beaches but a mandatory lunch stop  in an upstairs refectory above the port with long rows of green plastic tables and chairs. The less said about this the better. The shopping was fun as we had not actually done any to this point and who can say no to a few pairs of $5 Ray Bans. However this was foremost a snorkelling trip, so we set off in hope ! We visited two spots to the south, along with all the other boats. The first spot had some nice fish and mediocre coral and the 2nd spot had neither ! The boat was equipped with masks and snorkels but no fins – why you might ask. No room !  It was then a race home across the bay in the face of a very stiff breeze – thank god no-one was seasick – no provision for that either !

Now just when you are thinking what a whinger, I can say that with a little knowledge goes a long way to getting it right second time round. We went to a local dive shop and arranged another snorkel tour with just 8 people in a single engine long tail boat – snorkellers and divers which visited two rocky outcrops nearby and provided a far more authentic and enjoyable experience for 1/2 the price.

Thailand is also one of those places where children can do things that would be unthinkable at home. And so it was that we found the shooting range – a nondescript shed on the outskirts of town which allowed you to shoot a whole range of guns with live ammunition at targets in a safely controlled environment. Expensive yes, but an absolute wow for teenage boys.  The Krabi Night markets with great local food and ad hoc local entertainment (fire stick entertainers and kids break dancing) were a worthwhile visit and I have it  second hand that the local Kick Boxing tournament was good entertainment. And yes the local food was pretty good and inexpensive, the onstreet eating was great fun especially the banana and condensed milk pancakes made to order at a street-side cart (visited twice).

On balance, I would not go here for the beaches or the snorkelling.  And perhaps Tourism Thailand should direct some funds towards a stricter local authority to regulate the day tour market and fix the issue of rubbish pollution which really does spoil the experience.